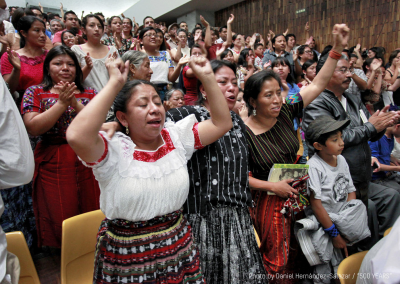 Mayan survivors of the Guatemalan genocide cheer the guilty verdict against dictator Ríos Montt. He was convicted and sentenced to genocide and crimes against humanity on May 10, 2013, given an 80-year sentence and sent directly to prison. It was the first time the perpetrator of genocide against indigenous people had been tried in a court of law. Photo credit: Daniel Hernández-Salazar

The culmination of the citizen’s uprising in 500 YEARS was the bringing down of the President and Vice-President of Guatemala who are now in jail awaiting trial. Photo credit: Saul Martinez

Soundtrack of 500 Year by Sara Curruchich