From a historic genocide trial to the overthrow of a president, 500 Years tells a sweeping story of mounting resistance played out in Guatemala’s recent history, through the actions and perspectives of the majority indigenous Mayan population, who now stand poised to reimagine their society.

500 YEARS tells the epic story that led Guatemala to a tipping point in their history, from the genocide trial of General Ríos Montt to the citizen uprising that toppled President Otto Perez Molina. While indigenous peoples of Guatemala are no stranger to oppression, the recent events that took place over a tumultuous three-year span, change finally seems possible when their movement is met with civil society’s outcry to end corruption.

As witness to this heroic moment in Guatemalan history, 500 YEARS documents the beginning of the end of an unaccountable rule of law, and a society ready for change. Focusing on universal themes of justice, racism, power and corruption, 500 YEARS tells the story from the perspective of the majority indigenous Mayan population, and their struggles in the country’s growing democracy.

This is the third chapter of the trilogy of documentaries on Guatemala, led by Pamela Yates, and follows the films When the Mountains Tremble (1983) and Granito: How to Nail a Dictator (2011). The documentary film premiered in January 2017 at the Sundance Film Festival. 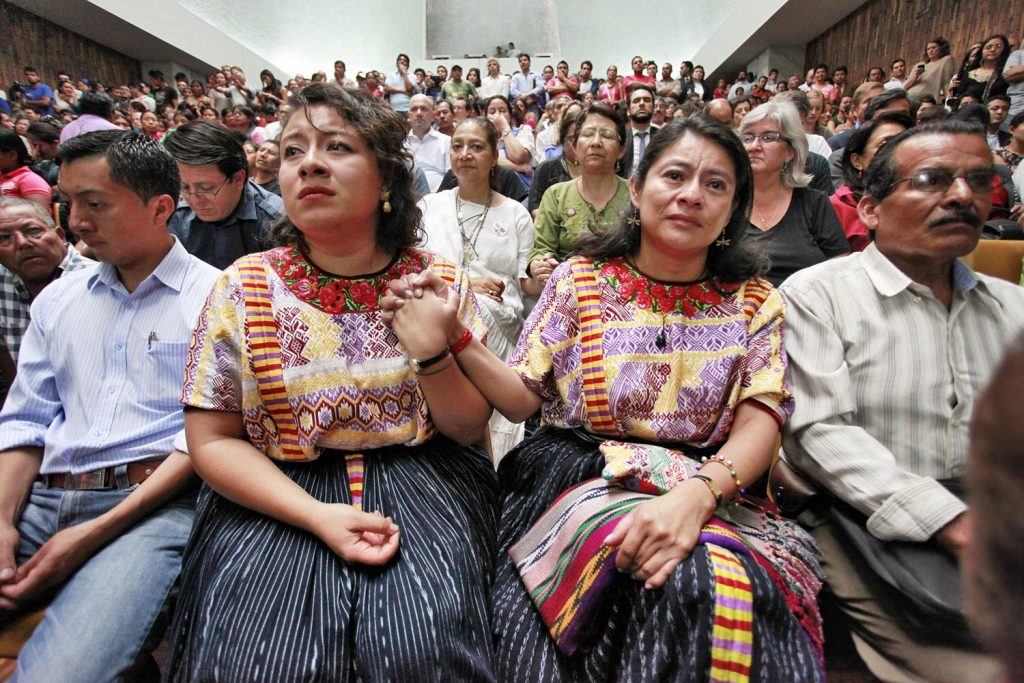 Early morning in Guatemala City, January 2013, soldiers with automatic weapons stand on street corners. A long line of indigenous Mayans head into the high court, an institution archaically dominated by the interests of a small white elite minority. “This is a country rising from the ashes of genocide, and that still lives in fear,” says Irma Alicia Veláquez Nimatuj, Journalists/Anthropologist and 500 YEARS protagonist. Just three decades earlier, the ruling elite, supported by the U.S., unleashed a dark storm of repression and massacres leaving 200,000 mostly indigenous people dead, and 45,000 urban artists, intellectuals, and activists disappeared. It has taken thirteen years of perseverance but finally the Mayan survivors are bringing one of the chief architects of the genocide, former President Ríos Montt, to trial.

While the outcome of the trial restores a momentary glimpse of hope for justice for Guatemala, when Ríos Montt is found guilty; ten days later, under ferocious pressure from the ruling elite, the Constitutional Court annuls the verdict.

However disappointing the trial was for many, others still saw it as a small and historically unlikely victory for the indigenous population. Mayan activist, Andrea Ixchíu, sees the trial as a call for Mayan unity, in the face of a new threats; the “genocide of the land” and community at the hands of ruthless international extractive industries aided and abetted by the Guatemalan state.

Andrea is right. The genocide did more than murder massive numbers of people, the army stole vast tracts of land and erased 626 indigenous communities from the face of the earth. Today, in the exact areas where the worst massacres were perpetrated, communities have been replaced with international mega-projects like open pit mines, massive hydroelectric dams, and sprawling agri-business, which continue to destroy Mayan lands. According to Irma Alicia, “if the government grants all the licenses that companies have requested, there will be a mine every 60 miles in Guatemala. It will destroy the country.” The then President Otto Pérez Molina was the chief cheerleader for all these international extractive industries.

But Irma Alicia has thought deeply about the situation, and explains that no amount of Mayan unity on its own can touch the elite rulers of Guatemala. The only hope would be to forge an indigenous alliance with the non-indigenous urban population, something unlikely in a country driven by structural racism. 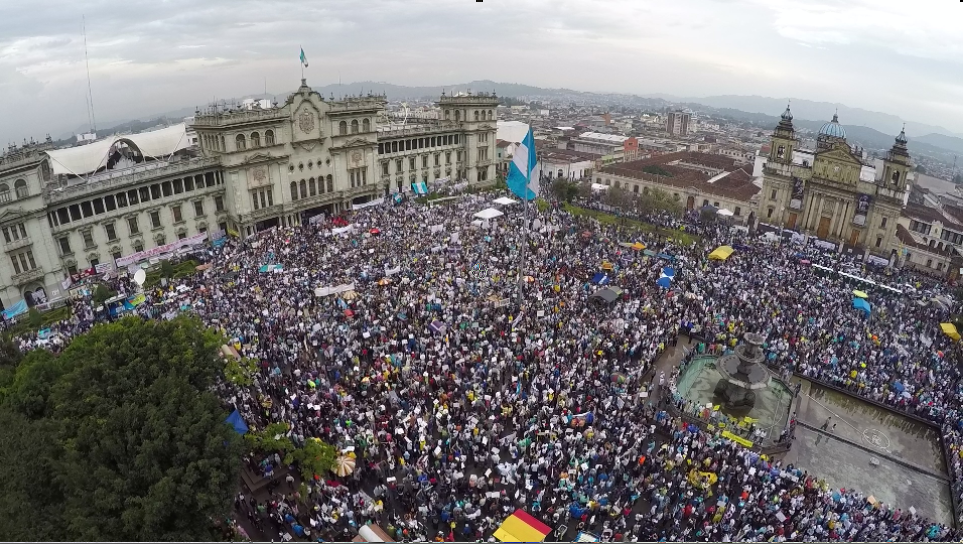 In the spring of 2015, something unexpected happens; irrevocable evidence of a massive corruption scheme in President Otto Pérez Molina’s government is exposed. His Vice-President is heavily implicated too. As Irma Alicia asserts in her newspaper column, corruption in Guatemala has become endemic, from local officials to the top politicians, and it is robbing the people of desperately needed services. After suffering decades of governmental abuse, the urban populace begins to stir with a growing sense of outrage. At first a few people sat in at the capital. Then, week by week, more of the urban middle class comes out to protest, joining up with thousands of Mayans pouring in from the countryside, uniting in resistance and overcoming the racial divide. Daniel Pascual, the peasant leader, is busy helping organize demonstrations across the countryside, while Andrea has founded a media collective of young people to produce a biting web-based news show that goes viral. Irma Alicia is there too, participating in the demonstrations, rain or shine, and describing it in her column. Then, the largest demonstration in the history of Guatemala rocks the capital and finally topples President Otto Pérez Molina, sending him off to Matamoros Prison like a common criminal. But like all real stories there are no Hollywood endings. Irma Alicia reminds us that this is just the beginning of a long road, but she and the other Mayan protagonists rejoice knowing this is a different and more hopeful Guatemala than the one they were born into, with the power equation forever changed.